Today in-between napping and jet lag assimilation, most of the group that had arrived took a walking tour of Alikianos. We strolled down to an old church near Vatollakos. This old Greek Orthodox church is one of the oldest churches in Greece having been establish in 1053 BC. 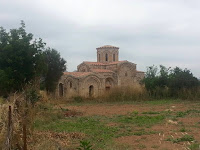 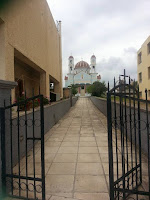 While strolling back to campus through the heart of the Alikianos village there is a church as blue as the Mediterranean sea itself. With it's own history forged from the times of WWII and Nazi Germany's control over Cretan Greece.


Not far from this centralized church there is a bust of a courageous Greek soldier who fought and died in battle against the German invasion during WWII. His story was told to me by his great niece, Cleo, who lives and raises her family in Alikianos. Cleo also told me about another local church named for Saint Katherine and how churches are named in honour of a female saint traditionally.

On this cloudy, overcast day we visited Suda Bay where there was a cemetery commemorating Australian, British, New Zealand, and Greek soldiers who died under a Nazi Germany attack on May 28th that last through till May 30th in 1941. 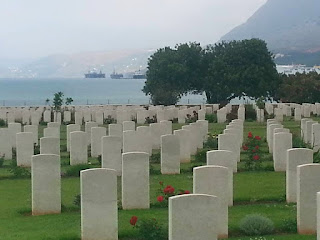 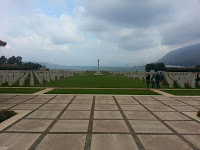 One of the most daunting experiences in this cemetery are the headstones that have empty spaces where there would normally be a name. Even though these soldiers are remember by their families I thought of the message the famous "Unknown Soldier" gave to me as a young girl. A girl who knew nothing of war and gallantry of war and services to ones country. A chill sadness from seeing how a person could fight and pay the highest price, ones life, for someone else's battle. I was a kid then but seeing those unclaimed blank white stones reminded me of the price of political battles can have on its people. 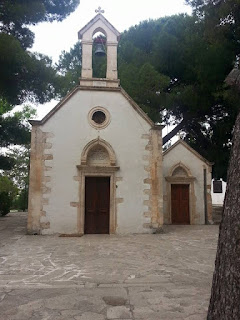 Then we went to the church of Profotis, or Prophet Elias Chania, where two historical Prime Ministers of Greece are buried otherwise known as the Venizelos Graves. The Prime Ministers were father and son. The father passed away in 1906 and the son died in 1964. 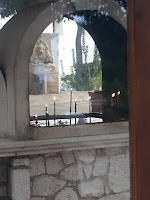 Next to the tiny church of Profotis was this glass encased offer of prayer. For my own personal reasons I chose to buy and light a candle in prayer for someone I knew in crisis. Myself being a person who never had religion as a way of life. And, having only known what I have been taught in one religious class I have taken, it felt odd in the moment, being unsure of what to do. But, I must admit I left feeling relieved, sensing that my concern was now in God's hands. 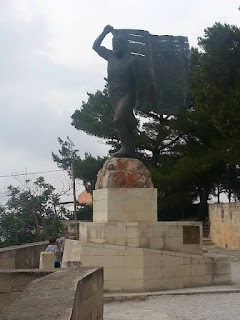 In the same vicinity there is the statue of the Grecian rebel holding up the Greek flag after the Turks burned and slaughtered Christian Crete in 1897. 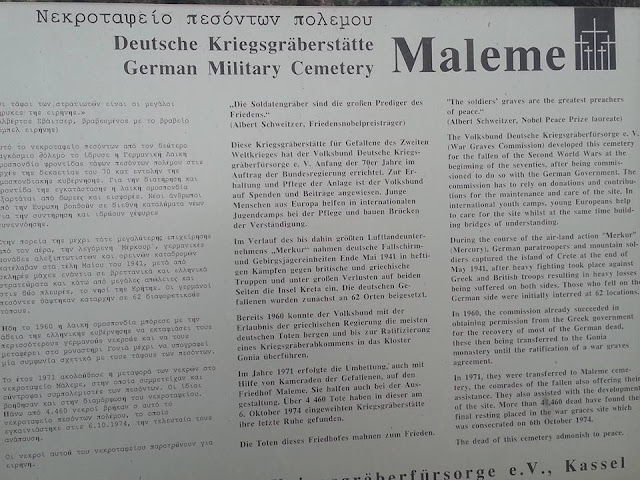 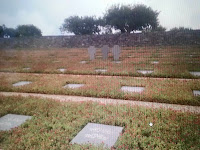 The cemetery of Maleme was dedicated to the German soldiers of WWII who died in the German take over at the end of May 1941.
Through out centuries of wars, and reigning dynasties the Greeks never lost their faith in themselves, in Greece, or in their Christian way of life. Their faith is so strong it is a weapon of war, and of politics. For the Greeks when there is hard times they are united to to put in harder work at saving their pride, their mother; Greece. When it comes to the hard times the Greeks are facing for a thriving economy the Greeks have an undercurrent of faith that they have always come out on top and always will. Even if there is struggle ahead they always have Greece and each other.