All over the world people are talking about the troubled economy in Greece. The Emmanuel Security Studies Program is more than partaking in this conversation.  In class we hear Prodessor Vamvakas lecture on the supranational and local politics pertaining this issue, while outside of the classroom we get a micro experience of it. This week we got to see, participate, and taste three different small businesses in Greece. Unlike the Costco (which Professor Vamvakas apparently loves), most things in Greece are small production, small business, and very local.

After classes on Wednesday we walked down to one of the local bakeries to learn how to bake bread. Mary led the team.

The baker told us that he was the third or fourth generation to own and run the bakery. And his son, who was with him, would be next. The baker’s mother was also there as they all live in the apartment above the bakery.His mom passed out juice and cookies, then more food, then more food.


Truly a small business, the baker told us he wakes up every morning makes the bread which takes him around three hours. After, he gets in his car and delivers it throughout the town!

Yesterday we went to Manousakis Vineyards—a local winery for a tour and tasting! I found this business particularly interesting, since the founder of the vineyard is both Cretan and American—and it was obvious. 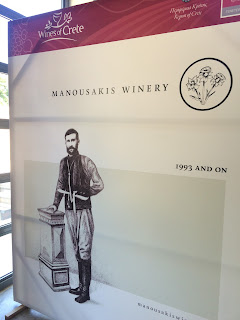 Unlike the tour of the small bakery, where we played with the baker’s son and accepted food from his mother, the winery had a commercialized feel. For instance, all the workers were wearing uniforms that said ‘Manousakis Winery’ and ‘make wine not war’ on the back. And Professor was telling us that the tour was an extra like 12 euro a person for a cheese plate! Another example of the difference in “local” businesses was our tour guide was from Boston! What a coincidence!

On site was this thousand year old tree. The tour guide told us that this tree was property of the church.


After tasting five different kinds of Manousakis’ wine, we squished back into the car and went to Agrocreta—a local packaging company. We got the opportunity to see the company from our Greek teacher, Yota because her husband works there.


Agrocreta cleans, weights, and packages oranges, avocado, and olive oil from local producers. He talked about the differences from packaging for distribution in Greece and international exportation regulations. They gave us each juice, a local drink, and can of olive oil.

As students from the United States we have a different perspective on economy and business. The bakery and packaging plant that we saw could not exist in America. Partly because of Professor Vamvakas’ beloved Costco. My experience of the Greek economy is that it is strongly interconnected with hospitality.