The Blood and The Body

We had been invited to a local bakery to make our own bread. The bread we made was from a old recipe made with a wheat grain that has a history to the land. It's a whole wheat based grain that is organic and not processed in such a way that the bread can be eaten by those who have gluten allergies or sensitivities. I personally find I have sensitivity to gluten, I love eating foods gluten is in, in the moment, only to pay the price later. In reflection, I notice that I have not had an issue with any of the obvious food items here in Greece, that would usually have gluten based. The process for local Greek grains must be different then back home.
Upon meeting the baker and listening to him describe his work day at the bakery and showing us how he makes his product there was a wafting of yeast and heat and I drifted into a homesick feeling, a memory. A comforting memory, from 32 years ago, I was a little girl of five or so, and watching my grandfather's bread rising. I would run around doing clumsy acrobatics to entertain myself but when grampy's bread was rising I slowed down and waited. For me the Sprunce bread he made was so good it could "stand on its own two feet", but it was always better as toast with butter. The bread, or reward, was worth the sacrifice of slowing down. Maybe that's why I still eat breads even with the consequences I have from the gluten.
The baker's own five year old was there and entertaining himself, who knows what the next 32 years will bring him. The baker talked about loading his van with bread and going around and sitting in different areas of the village to sell his bread. You can picture how he must communicate with all the villagers and hear of their news good and bad, sharing his peoples joy and sadness. These villagers support each other by providing each other with necessities of both food and laughter in life. That is what the term "breaking bread together" originates from. To sit together, to eat together, people commiserate, and then laugh about the whole thing. There is faith woven into this village through the interconnection with others. The Greeks congregate around food as often as they congregate at church.
In Greek Orthodox has the practice of the sacramental bread as a way to take in all of what Jesus Christ represents. Jesus Christ and his following Christians represent all that is forgiveness, humbleness, patience, tolerance, unconditional love, hope, and faith.  The embodiment of Christ and taking in the sacrament of Christ means to exercise what he represents as best as you can. This gentleman was of such service to myself and my fellow classmates and I believe  it extends from the culture of giving of oneself as taught in Greek Orthodox Christianity. These prideful people may have little but give so much to others. 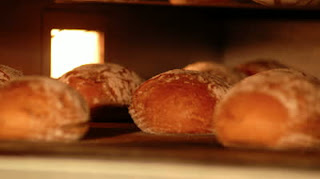 The Manousakis Nostos Winery tour was very educational tour on the growth and care of a grape vineyard. As a landscaper and an organic farmer I love especially love growing all things food or food related. Having worked in the wine and beverage industry for several years I knew all too well about the methods and reasons on how to taste wine. Even though I did not partake in the sampling I appreciated the run through of the specialty blend leading to the owners un expected favourite which was only to be a part of a wine blend, his white wine.
Mr Manousaki has mostly handed the reigns of the vineyard over to his daughter Alex who has done a beautiful job overseeing production. In the tour there was a characteristic old olive tree that the local church still owns. In Greek history olive trees were loaned like money in order to grow and start a farm to have production. Olive trees were also inherited like Alex has inherited her role at Manouskis Nostos Winery and Vineyard. 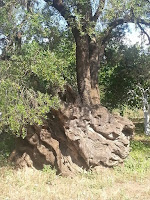 The church has never reclaimed this olive tree which is on every label of the Manousakis Nostos bottled wine. However, it is still the property of the Greek Orthodox church some years later. Wine is plays a role in the Christian Orthodox church. In the transubstantiation the blood is represented by red wine and is used to represent ingesting the blood of Jesus Christ's sacrifice and blood let from being on the cross. Christian practices have a belief that upon eating the bread and drinking the wine they are taking in the sacrifices of Jesus and becoming one with Jesus' ways and lifestyle. The practice of loaning an olive tree altruistically is just one of the many virtues the Christian followers are said to practice. (Crediting picture to the website http://www.nostoswines.com) 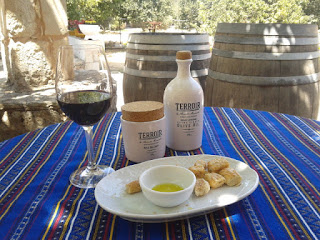 In Crete every person I have met has truly in-captured the virtuous practices Christ talked about. Whether an individual lives a day-to-day lifestyle of Christianity or sits among the congregation regularly, these Cretan people are truly blessed with virtues other people search all there lives to have by practicing extreme measures of self-discipline to live for others happiness.
There is a Greek mythology that tells a story of temptation; Pandora and the box. Zeus had gathered the Spites; Old Age, Labour, Sickness, Insanity, Vice and Passion, and placed them in the box along with one other thing; Hope. Much like the story of Eve eating the apple from the Tree of Knowledge of Good and Evil, Pandora released the Spites and Hope unto the world. Hope has been a means of survival that is unexplainable to physicians when witnessing a dying patient live. Hope and Faith have held people together to get through terrible, horrible circumstances like WWII. Hope is more powerful than all the Spites in this world and in both the Greek Mythology tale of Pandora and the Christian version of Eve in Genesis 3 like in the lives and history of Greece.
Currently, Greece is looking down a political, economic, and cultural barrel. Greece has a choice to make. Does Greece stay on with the Eurozone linking Greece to the other 18 European states in the Eurozone and the 27 other states in the European Union? Or does Greece go back to the Drachma currency and break ties and financial obligations?
On a political level staying in the Eurozone and European Union would incorporate a new level of government unseen before; a super nation. At this time in history the European Union has open borders for the member state's citizens, labourers, and visitors. This simplifies travel, currency, employment, and sustainability.
As for the economic aspect staying in the Eurozone and European Union there would be a time of financial hardship. By cutting funds to social welfare programs, to the elderly, the disabled, and the needy the people of Greece will be subjected to poverty and lack of government aid for support. But, leaving the Eurozone would create a wave of effects on two currencies. The Euro would increase in value by losing the Greek debt. However, the security other Eurozone countries would lose in the Eurozone itself could cause their exiting the Eurozone as well. This would cause the Euro to fail. The Greeks going back to the Drachma initially would lower in value from leaving the Euro and bring in account Greece's debts. Greece will also have to pay in cash for any international expenses losing all financial credibility un-dubiously. Moreover, the people of Greece who have money in the bank will see their funds switch from Euro to Drachma with more volume but possibly less value. The social welfare programs may come back but they will be smaller than they were and Greece will be on its own to find financial stability and self-sufficiency. The benefit to this disconnection from the Eurozone and the European Union is the new marketing possibilities that being in the EU has limited Greece from having sales with countries outside EU alliances. By breaking from the EU and Eurozone sales to Russia could be possible or maybe loans from China, all new allegiances are plausible. Especially, when Greece is going to have to find a way to have new import and export for a sustainable GDP.
In conclusion, the 28 different cultural and traditional values within the European Union are a large component of the blockade that prevents total unity within the EU. If the countries found a national European identity then a super nation government would be more possible. Unfortunately, when countries resist change they also resist growth. And that is what is happening in the case of Greece. In short Greece's pride is preventing the EU and the Eurozone from showing them how to become a developed country. Despite, the ugly uncomfortable notion of having to be exposed financially and not being allowed privacy this is the price for such a financial unity and for economic progress. On the other hand If Greece fights for its financial independence from the Eurozone it will maintain its unique traditions and cultures of family, and faith. Greece may experience a great recession from this choice but, their culture being what it is, would experience it more as the grapes of hope, over any grapes of wrath, seeing as how perception is everything.
Going back to the little boy in bakery; what will the next 32 years have in store for him? Will the Greek Orthodox Christian cultural traditions have him as a baker thriving for family through faith? Or will the Greeks have assimilated into a European Union culture? Which would allow for the smell of bread to be more like mine; a distant memory, with Euro in his pockets in exchange for his ancestors way of life. We will have to wait and see how this unfolds.
Posted by Unknown at 4:24 AM