At the NAMFI Installation, the bus was checked in, we were walked into an auditorium, and received an informative lecture on the bases uses, operations, and contributors. After the lecture we walked back onto the bus and driven to the missile firing site. 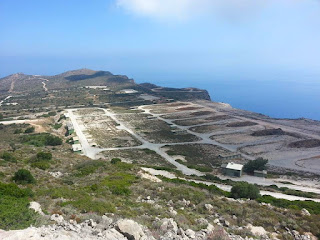 On site we were encouraged to take photos and look around. Everything was explained geographically and how it related to the chart and graph descriptions of missile and droid deployment and in range marked targets.
There were officers relaxing and a good amount had their families with them. Crete, Greece is an in-between station for most soldiers who are coming back from the Middle East stations or the more current post with vested interest of Djibouti, Somalia. Soldiers that are just passing through can find a space to relax here in Crete before returning home, maybe catch their breath as they transition from military lifestyle to day-to-day civilian life again. It was obvious some soldiers had their families meet them in Crete for a vacation/reunion, and Suda bay has some family oriented fun like a pirate ship geared for kids and parents at play. 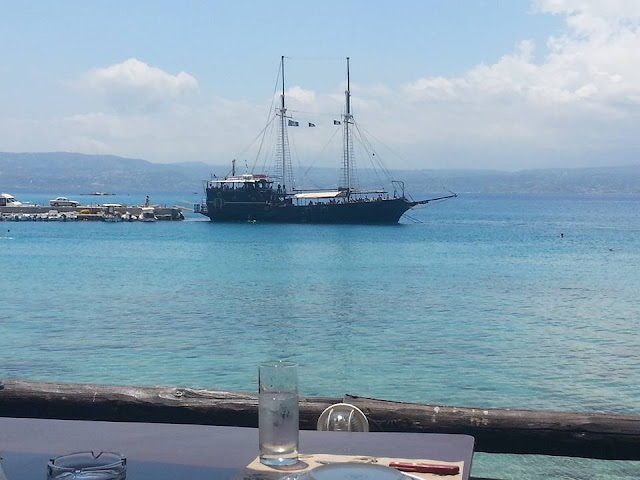 As a class some of us enjoyed "firsts" for Crete cuisine. The octopus in oil is out of this world and has been added to my list of favourites. Whenever I expand to something as unusual or off-putting as octopus it opens the door for another foodie adventure in the future. I did however have some concern about the environmental factors knowing that large amounts of chemical warfare weapons have been discharged in the fishing vicinity. But, like a any person I can turn a blind eye in the name of person interest, this was an interest of great food. As an environmentalist and a fairly health consciences person I have great concern for people who have a lifetime of secondary exposure to the chemicals in the sea through seafood consumption.
Once we headed to the United States Naval Base described to us not as a base but as a Naval Support Activity. The language in the name alone suggests the strategic area is coveted and the activities that take place are quite covert. The term "Support Activity" also implies that being on a yearly lease continuously with Greece they need to be delicate in their presence to maintain their post. Also, our admission was our passport in exchange for an ID badge.
The lecture we were given was very informative, you were left with the impression that we were told everything allowed to be told and that was a fair amount. He did open up for questions and did his best to answer as much as possible some topics he flat out said he could not discuss. All in all our guide was a very entertaining character and was as much interested in us as we were his tour.
Suda Bay is a desired military hotspot and if the US Navy were not here in Crete, Crete would be vulnerable to all other large military contenders in the Eastern Mediterranean, Middle East, African and Asian countries looking to branch their navy out.
Posted by Unknown at 4:26 AM