King Minos and His Civilized Society

I have been anticipating this portion of the trip since I caught wind of it being on the schedule. I grew up reading Greek Mythology specifically the stories of the Labyrinth and Minotaur; the body and legs  of a man, and the head of a bull. It was said to eat people who went into it's labyrinth never to be seen again. The true story behind King Minos' Minotaur was actually only a bull, the King's prized bull. Because of Athens responsibility for the death of King Minos' son, King Minos was given seven women and seven men from Athens to play in his game to leap onto his bull, the Minotaur. The dangers in this lead to many deaths of the Athens athletes and began the myth of a man eating half bull half man creature. 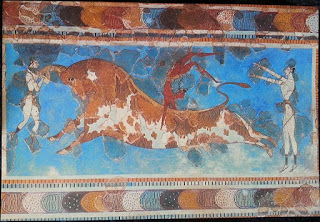 King Minos was a peaceful, fair man whose people wanted for nothing. Whatever the Minoan's needed they traded for and their civilization was known as one without war. Here is a civilization to revere and learn from. There is ten of us students on this program and we cannot seem to organize to share two internet accesses, water for shower times, or our true selves.
It is interesting how we are all student of either political science, international relations, business, or the like, and we are incapable of organization, negotiation, structure, and humanitarianism within in our own small group. I am concerned that if diplomacy and decency cannot live amongst us here; how will we ever pass it on beyond us in grander venues in the future? In the way we all hope to achieve some day.


"Our politics are so divisive"
(Statecraft and Globalization Dr. Vamvakas discussing American's questioning politics in place on June 15th 2015)
Posted by Unknown at 6:06 AM